In a recent study conducted by the University of Oxford and the World Health Organisation, socialist Nicaragua was placed number nine on a list of the ten safest countries to visit during the Covid-19 pandemic. Nicaragua is the only country within Latin America to appear on that list.

Nicaragua’s unorthodox but highly effective management of Covid-19 has so far been a great success. In an informative article written by John Perry for FAIR, Perry demonstrates how the country has approached the Covid pandemic swiftly and thoroughly. After consultations with South Korea and Taiwan—countries that overcame a seperate coronavirus epidemic in 2002—Nicaragua implemented a careful plan of action that differed from most other governments around the world:

“Nicaragua announced its strategy much earlier (in late January, when most Western countries were still dismissing the likelihood of a pandemic); it prepared wards in 18 hospitals to receive Covid patients, and reserved one hospital solely for this purpose; it put health checks in place at points of entry to the country with mandatory quarantines, and it began a program to combat misinformation being purveyed via social media (several rounds of house-to-house visits, a free phone line, streetside clinics and more).”

What’s most impressive about Nicaragua’s response is it has had just one Covid peak and has subsequently ‘flattened the curve’ of cases and deaths. Half of its cases and deaths took place between mid-May and mid-July 2020, and since then Nicaragua has kept the virus at very low levels. Strict controls at the border and active door-to-door “health brigades’” have been essential in this and go some way to explain how Nicaragua has avoided repeated lockdowns.

These successes have gone entirely unrecognised by Western international media who have instead embarked on a political disinformation crusade against the government led by the Sandinista National Liberation Front (FSLN). The BBC claimed Nicaragua hadn’t implemented any measures to combat Covid-19 at all. While The New York Times, The Guardian, and The Washington Post all spread stories that Nicaragua’s president, Daniel Ortega, had “vanished”, that he was denying the existence of Covid-19, and was anti-lockdown. The sources for these vexatious rumours were all linked with the US-backed government opposition in Nicaragua, such as the local Nicaraguan newspaper, La Prensa.

Nicaraguan-based doctors and journalists, such as Perry himself, have offered rebuttals to these pieces but were largely ignored by the same international press. This includes the statistics for cases and deaths being circulated by non-governmental agencies, which are grossly exaggerated:

“official figures report 6,629 cases in total, whereas the unofficial Citizens’ Observatory reports double this number, 13,278. The higher figure is based on “suspected” (not tested) cases, and according to the observatory website includes “rumors” as one source of information. But even the higher figure is dramatically lower than those for adjoining countries, as this chart shows.” [below] 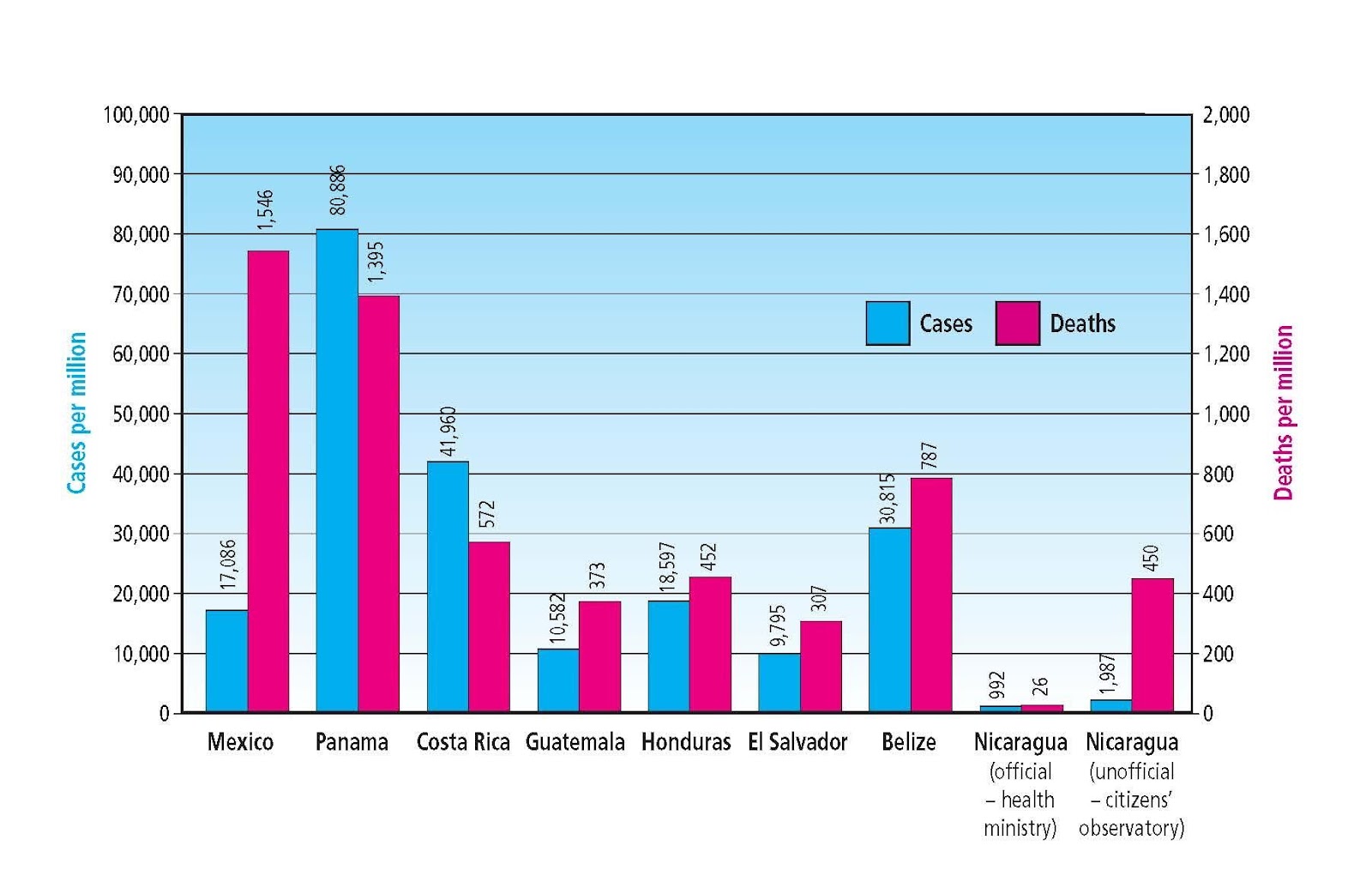 This graph additionally shows just how much more effective Nicaragua’s pandemic model has been than its geographic neighbours, all of whom are run by neo-liberal governments that have put profit before people. As if tackling a pandemic while under sanctions wasn’t difficult enough, the Nicaraguan government has had to implement this successful public health campaign while mitigating against the impact of category four and category five hurricanes (Eta and Iota) in 2020. We also mustn’t forget this is a country that is still recovering from the US-coup attempt in 2018 that crippled its economy.

Despite all this, Nicaragua’s attempt to eradicate Covid-19 victoriously continues apace. The vaccination programme is now well underway. To date, the country has received approximately 1.9 million doses of vaccine, mostly comprised of donations from Russia, as well as some from India and the COVAX programme.

You can read John Perry’s complete analysis for FAIR here.

This article was written in collaboration with the Nicaragua Solidarity Campaign UK.

This site uses Akismet to reduce spam. Learn how your comment data is processed.