In 1963, the CIA financed campaigns against three rectors of three universities across the Mexican states of Michoacan, Puebla, and Monterrey. As well as mobilizing right wing student-teacher groups and anti-communist propaganda institutes, also financed by the CIA, under secret project “LICOAX” and “LIHUFF” to carry out strikes, physical confrontations, gather intelligence, and spread the campaigns outside the university campus.

As detailed by the declassified CIA document below: 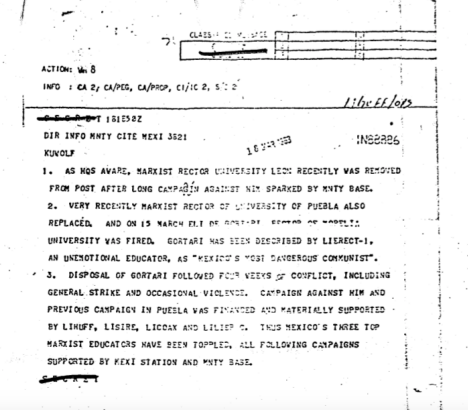 There’s a rector in the report named Eli De Gortari, who was identified as “Mexico’s most dangerous Communist” by an informant (an unidentified professor) that was working with the CIA.

Before being elected as rector at Universidad Michoacana de San Nicolás de Hidalgo in the state of Michoacán, Gortari was already known as a leftist professor and writer with ties to Socialist and Communist groups with constant participation in student movements.

After being submitted as a candidate endorsed by top student organizations, such as the Federación de Estudiantes de la Universidad Michoacana (FEUM) and Consejo Estudiantil Nicolaita (CEN), Eli De Gortari would be officially selected as rector in 1961 by the University Council. Gortari was also well received by Governor David Franco Rodriguez who sympathized with Eli De Gortari’s political views. 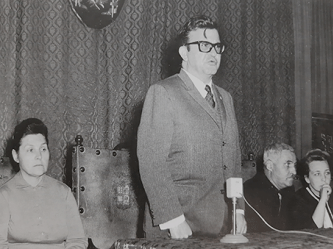 What was Eli De Gortari doing as rector at the University in Michoacán to be labeled as “Mexico’s most dangerous Communist”?

Eli De Gortari concentrated on planning his and the universities actions using Dialectical Materialism (A Marxist approach). The main goal being to build a solid connection between education and the community, using the university as an institution to transform the material conditions of the surrounding community.

Some of Eli de Gortari’s actions and accomplishments as rector from 1961-1962:

– Establishment of a student Medical Center

– Expansion of the university campus through the construction of new buildings dedicated to majors such as nursing, engineering, etc.

– Improved working conditions with the ideal that better labor conditions for teachers and staff promotes a higher quality of education. Including the increase in the salaries of the professors and campus workers,and providing health care for staff; thus, becoming the first university in the nation to achieve this.

– Establishment of a low-cost night school with education levels ranging from middle to high school. Specifically created to help workers who wanted an education as well. The night school was operated by university staff and a few education majors who in the process gained experience teaching.

– Establishment of new science programs and majors,while sustaining the humanitarian focus of the university

– The creation of a community outreach program to provide the surrounding area of Morelia, Michoacán with artistic, cultural, and sport activities. As well as medical assistance, self-care education, counseling on the construction and maintenance of housing, legal advice, etc.

During Eli de Gortari’s first years as rector, the university was able to acquire the highest funding it had received in its history, as well as other resources gathered by the student federation. With all these changes happening so quickly, there were rumors of a group of people who weren’t happy with how things were being handled and were secretly conspiring.

On February 1, 1963, the CIA financed student-teacher group officially took action: 75 right wing students and some teachers signed an Anti-Gortari manifesto demanding he be removed from his position. This would mark the start of the CIA financed campaign against Gortari, which included claims such as, the misuse of funds, not being suitable for the position since he was born in Mexico City, that the community outreach program was not created to help the community but to spread Socialist and Communist ideology, and more.

In reaction, Pro-Gortari teachers and students organized in his defense against the right wing group. This would start confrontations between both groups on campus.

Since the majority of staff and students supported Gortari as rector, the University Council decided to suspend those who signed the Anti-Gortari Manifesto and were carrying out the campaign. That same evening a group of the Anti-Gortari students went to Gortari’s office to insult him and held him hostage, along with the general secretary of the University and the Dean of the Law Department.

The Anti-Gortari students had a strike earlier that same day but failed to have any significant impact.

The University Council decided to indefinitely expel 34 professors and 13 students who signed the manifesto against Gortari and were disrupting activities on campus. 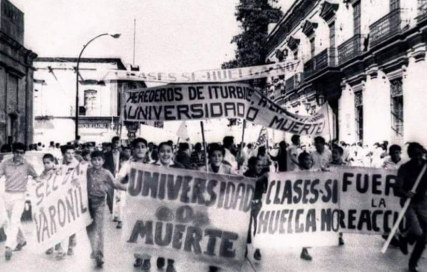 At this point, out of 340 professors, 280 were supporters of Gortari and out of 5,000 students only 250 aligned with the Anti-Gortari group. It was very clear that Gortari had the support of the majority on campus.

However, Anti-Gortari students and staff started to reach out to the conservative and anti-communist groups outside of campus, as well as reaching out to business men, banks, the industrial sector, etc.; insisting they too should get involved in the removal of Gortari. Through the support of their CIA financed activities, they gained the support of the new governor, Agustin Arriaga Rivera, as an ally despite claiming neutrality.

Governor Rivera sent a letter asking Gortari to re-admit those who were expelled from the university;this letter was also signed by Military General Felix Ireta. Gortari replied saying he would take the letter to the University Council so they could collectively decide.

During the first days of March 1963, the university became a tense environment as a result of the Anti-Gortari groups occupying buildings in protest while the Pro-Gortari groups were trying to avoid them wanting the campus to go back to normal.

The governor passed a new university law proclaiming the local government is the only entity with the authority to pick rectors instead of the University Council.

Eli De Gortari was fired the following day and all the University Council members were removed from their positions. Students and staff began to organize campus-wide protests. 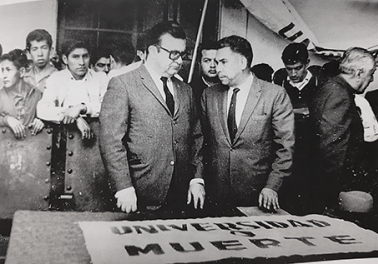 While Pro-Gortari student leaders met with the governor to express their disagreement of the removal of their rector, the military tried to enter the university to occupy it.

The story of the removal of Eli De Gortari, “Mexico’s most dangerous Communist”, by the campaign financed and mobilized by the CIA, which led to the murder of a student is just one of the many moments when the CIA has committed imperialist actions in universities in Mexico.

One must learn and analyze this history to understand how communities in México have organized and attempted to change their material conditions, but were met with various repressive strategies. Not just from those in power within Mexico, but also from international forces like the United States/CIA who have absolutely no right in deciding how communities in other nations collectively move forward.

ANTICONQUISTA is the communist party of the Latin American and Caribbean diaspora. We are dedicated to exposing and fighting the capitalist-imperialist system, the root cause of our displacement. We provide analysis of the region’s current events and history from a communist, anti-imperialist, anti-racist, Third Worldist and pan-Latin American perspective. Our analyses take the form of articles, books and videos. We also engage in hands-on political work intended to serve our Latin American and Caribbean people, both in the motherland and the diaspora. In the motherland, we provide financial support to revolutionary movements resisting capitalist-imperialist oppression. In the diaspora, we organize alongside our migrant sisters and brothers under attack by racist, imperialist governments. Help us expose and fight capitalism-imperialism. Help us build the communist party of the Latin American and Caribbean diaspora. Join ANTICONQUISTA!
Previous post

How Black Colombia Helped to Bring the Left to Power

This site uses Akismet to reduce spam. Learn how your comment data is processed.